So, a long time ago Carrie had a dog named Scotty, and she used to fill in at the police department as a dispatcher. For those of you who don’t know, she dispatched part-time because even though she made enough money writing (right then) she got worried that:

1. I will suddenly make no money at all

2. I need to build up social security benefits

3. I will forget how to interact with other humans if I’m always at home.

Scotty was her new dog and he was a rescue dog from Alabama who was in a kill shelter, and for a long time we have thought that he was perhaps a grandpa who liked crawfish and Bud Lite a lot and was somehow caught in a dog’s body - like he was a shapeshifter who got stuck.  He had a puncture wound in his neck when he got to Maine, two small holes. So, a vampire with a shapeshifting virus was possibly to blame.

Carrie had decided this was a true possibility. Already, she'd witnessed him:

1. Get ice out of the refrigerator.
2. Use his paw on a door handle to open a door.

And then when Carrie came home late, she saw a drawer that had been COMPLETELY shut when she left the house, and it was now open. Food was strewn everywhere. This meant Scotty grabbed the drawer with his mouth and got it open at least a little bit and then he either wedged his nose in or something and opened it more.

Why would he do that? Oh, he was probably sick of dog food and bored because she was gone. Which is doggy behaviour, we know,

Side note: Dog saliva combined with powdered sugar on a wood floor creates a glue-like paste that is impossible to vacuum or mop up. It must be attacked with Clorox bleach wipes. Carrie swears. She did not know this until that night.

And finally, though they ate peanut butter chips and brown sugar and confectioner’s sugar and Crisco shortening and Shepard’s pie mix and Italian seasoning mix, they did NOT eat chocolate!

And the dogs left it, only tearing open the end.

Carrie sort of imagined Scotty holding Tala back and saying, “Baby. It smells good, but it’s poison. It will kill us. Lets go lick up the sugar."

Writing Tip OF THE POD

What does all this have to do with writing? It's like what we were talking about in our Random Thought in the Car (you have to listen to hear that and about Carrie's accident). All stories aren't good ones. All people aren't perfect. The best writing is when those little imperfections about character or people peek through.

And use everything for your stories. Mine your lives and your dogs' lives, too.

Dude. Do not eat the chocolate. Have some self control.

You can order this bad boy, which might make it have a sequel. The sequel would be amazing. Believe me, I know. It features caves and monsters and love. Because doesn’t every story?

You can buy limited-edition prints and learn more about my art here on my site.

You can get exclusive content, early podcasts, videos, art and listen (or read) never-to-be-officially published writings of Carrie on her Patreon. Levels go from $1 to $100 (That one includes writing coaching and editing for you wealthy peeps).

Check it out here.

A lot of you might be new to Patreon and not get how it works. That’s totally cool. New things can be scary, but there’s a cool primer HERE that explains how it works. The short of it is this: You give Patreon your paypal or credit card # and they charge you whatever you level you choose at the end of each month. That money supports me sharing my writing and art and podcasts and weirdness with you.

Lately, a lot of Carrie’s writers have been talking about how they want to write with intention and that always makes Carrie’s brain hitch a bit, which is why we’re doing this podcast, a slightly deep dive into intention. According to Merriam-Webster’s Dictionary, intention means the thing that you plan to do or achieve : an aim or purpose And over at a site all about spiritual wellbeing appropriately called Blissful Light, Intention is probably one of the most essential parts of healing, abundance, manifestation, personal and spiritual development.  Whoa, right? That’s a lot to put on one word or one state of being. Healing. Abundance. Manifestation. Personal AND spiritual development. It almost makes you tired to just think about it. And it’s also a lot of . . . words. Abstract words. And over here on Dogs are Smarter Than People, we’re not really big on abstractions. So, we’re going to break it down a bit for you in real world terms. You want a hot dog. You find money. You go to a store. You buy a hot dog. You make a decision: buy a hot dog. You do the actions: find money, go to store, buy dog. Intention works the same way. You have to decide what you want and then you have to take the steps to get what you want. Sometimes the deciding is the hardest part. It’s like when you go to the grocery store in the U.S. before COVID and there is an entire aisle full of cereal choices. Your brain balks. So much cereal! Too much choice. Wheatabix or Captain Crunch? Co-co-puffs or corn flakes? You can get stuck. Back in ... 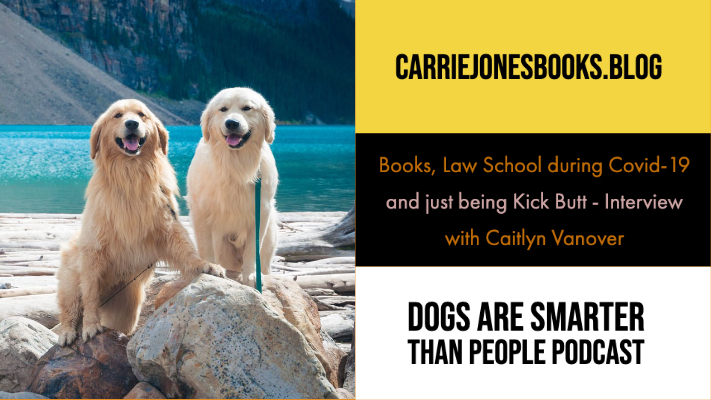 Hey! Welcome to a bonus interview episode of Dogs are Smarter Than People, the usually quirky podcast that gives writing tips and life tips. I’m Carrie Jones and with me today is Caitlyn Vanover. Caitlyn is an awesome human out there making a difference in the world, She is in law school in Illinois, class of 2022, and she has an Instagram devoted to books, which is a straight shot to this writer’s heart. She's not just a book lover. She's a first-generation law student. It was through The WILLOW Project that I knew I was going to: help those who couldn't help themselves; be a voice for the voiceless; and "help those that have fallen through societies cracks."Caitlyn Want to be inspired for good and to do good? Plus, listen to someone cool? Download the episode or just listen and give Caitlyn and The Willow Project some love. Links Caitlyn mentions: The Willow Project! http://willowprojectstl.org Her bookstagram account @life_law_literature And her two awesome friends of Cait's with AWESOME content: @twokidsandabook and @lindsays_books SHOUT OUT The music we’ve clipped and shortened in this podcast is awesome and is made available through the Creative Commons License. Here’s a link to that and the artist’s website. Who is this ...

In Episode Five of our podcast, we get a closer look at the interpersonal dynamics of Carrie and Shaun and also insight into the ingredients of a White Russian, which is now called the Caucasian. The subtitle for this podcast is Sometimes Even Those Who Lack Confidence Must Insist They Are Right   Writers like Carrie sometimes don’t have a lot of confidence. Carrie is constantly being told by business people the following two things: There is no money in modesty. She needs to be more confident. Sidenote: It’s hard to feel confident when people tell you that you lack something – confidence.  If you are worried about being someone’s confidence, give them a hug instead of a lecture. Always Carrie is getting a hug. Sorry you can’t see her face. However, Carrie turns that thought back around and claims that her lack of some confidence occasionally actually allows her to strive to be better, to keep learning. And her openness about her lack of confidence actually makes her authentic. She is confident about being authentic, basically. ...