There Is Nothing Better than a Sexy Setting Dogs Are Smarter Than People: Writing Life, Marriage and Motivation
There Is Nothing Better than a Sexy Setting

Lately, Carrie has been talking to a lot of writers that she coaches and edits about settings.

That’s because a lot of writers are blowing them off. So, she’ll read a lot of passages like this:

“I thought maybe we could have some hanky-panky.”

So, we know that Shaun wants to have some hanky-panky and the “I” of the story is sitting at their desk. But we don’t know what kind of desk, where that desk is, if there are other people around, or even how she or he or they are reacting to Shaun’s request for hanky-panky, right?

Setting is obviously the place where things happen, but it’s more than that, right?

What do we mean? Well, here, let’s play with the setting of that excerpt above.

The dirt-streaked wall of my cubby gives a bit with the pressure of his hand, holding him up as he leans over my shoulder. “Yep.”

Betty is just on the other side of that cubby wall and beyond her is my boss, the other workers, everyone typing on their computers, pretending to be busy reading emails, analyzing data, reading contract clauses. Liars all. The air smells of old coffee and pot, broken things, broken people.

It doesn’t matter. Nothing matters.

Shaun clears his throat, moves lower, closer to me, my hard metal desk, standard issue. His giant elbow brushing against the wall again. His voice is a low whisper. “I thought maybe we could have some hanky-panky.”

Someone coughs. That someone is Betty. I flip the page. A tentacle is exploring places on an elf that should probably not be explored. Shaun doesn’t smell like old coffee. He smells of sandalwood and pine, like man.

Now we have a lot more context even if we don’t know all the details of her office, the chair, the desk. The characters aren’t floating in a void.

Here, one more example before we move on. Same dialogue again. But different setting and different feelings.

“Hey.” Holding my phone in my hand, I sit at my broad, metal work desk, give up and stand on it, pushing the papers and books about writing and being a freelance human off with my heel. They flutter to the floor. From up here, I can see everyone. Janice with the pink hair. Bob with the coffee stained shirt and no hair. Countless nameless coworkers. I raise my voice into a yell that echoes across the vast space of the office. “You coming over later?”

Bob stares up at me. His mouth gaping open. I can see his fillings. He puts a finger over his lips. I give him a finger of my own. Lights flicker overhead.

Janice gives me a thumbs up. Beyond her, other coworkers are watching and/or pretending not to watch. The fans above them, hanging from the drop ceiling, spin around and around. My manager opens the door from his office, starts angry striding towards me.

Across the office, all the way in a prestigious cubby by the dirt-grimed windows, Shaun stands on his own desk and shouts, “I thought maybe we could have some hanky-panky.”

Someone giggles. The world smells of promise, lemon bleach those cleaners use. The manager stops, his bald head turning from Shaun to me to Shaun.

I hang up the phone and yell across everyone. “Okay?”

Setting can reinforce what we’re doing, add context and even tension, right? It can transform an exchange into a story. You don’t want to blow it off. You really want to make it as sexy as possible.

Don’t glob it all down in paragraph after paragraph.

Sprinkle it into the dialogue and action like salt.

Let us reiterate: Don’t overdo it.

Seriously. See that first tip up there. It’s like art in your house. You don’t put all the paintings in one room. Spread it out.

Make sure that the details you add are the ones that are important to the reader.

Use setting to add subtext.

You can say “there is a fan in the office” or you can say, “The fans above them, hanging from the drop ceiling, spin around and around.”

Boom! Now you know that they feel trapped and like they are going in circles. Cool, right?

Be weird. Be quirky. Don’t be normal.

Our readers are aware of what a desk is, right? What an office is? But it’s the weird and different things that make a scene and setting matter. Let them see the escaped gerbil running across the floor. Let them hear the sound of a coworker sucking air through their teeth nonstop. Show them the broken blind, twisted and lopsided on the window.

Settings make a book real. They add dimension and character. Layers. Don’t blow them off.

A sexy setting is so important in your life. Surround yourself with dog toys and cozy blankets, twirl around around before flopping down so that you feel perfect.

What would you do to make a difference?

After his best friend Norah was almost abducted, Cole Nicholaus has spent most of his childhood homeschooled, lonely and pining for Norah to move from best friend to girl friend status. When birds follow him around or he levitates the dishes, he thinks nothing of it—until a reporter appears and pushes him into making a choice: stay safe at home or help save a kidnapped kid.

Cole and Norah quickly end up trying to not just save a kid, but an entire town from a curse that has devastating roots and implications for how exactly Cole came to be the saint that he is.

Can Cole stop evil from hurting him and Norah again? And maybe even get together? Only the saints know.

From the New York Times and internationally bestselling author of the NEED series, Saint is a book about dealing with the consequences that make us who we are and being brave enough to admit who we love and what we need. Money Is Not the Enemy and the Habits of the Rich

So apparently millionaires have habits that us non-millionaire people don’t have.  These habits don’t include taking a bath in $100 bills even though that would be cool. The habits aren’t quite that sexy.  So before we get started, we just wanted to remind you that prosperity doesn’t equal merit. The richest people sure as hell aren’t the best people, the kindest people, or the most ethical people. They are the richest. That’s it. Some of them are nice. Some are douchebags. Some are in between. But prosperity is super intriguing right now because a lot of us are a bit struggling to figure out how to survive and if that’s you, we get it. But we want you to do more than struggle, we want you to feel secure.  In Lifehack, Dr. Carol Morgan has an article entitled “8 Ways of Thinking To Make You Become Rich.”  Her ideas are mostly about belief mindsets.  I AM A ROCK STAR So some of these ideas are pretty chill. Like “believe you are worthy.” Presidents are very good at this – presidents from both parties, actually and all the candidates.  The rest of us humans and especially writers? Not so much.  Don’t think about how you suck or how you aren’t a YouTube star or J.K. Rowling or whatever. You need to believe in yourself and that you have something to offer this damn world. What you offer is what will make you wealthier.  Writers have ...

Pooping in Public. Don’t Be A Static Character, Baby.

Carrie’s teaching a class at the Writing Barn for the next six weeks about . . . character! That means we’re talking a lot about character in our house. Of course, we’re also being characters because being characters is more fun than talking about them. It’s like the difference between telling in your writing and showing. And in the writing world one of the big annoying things writers hear about their characters is that the character is “too static, man.” What’s it mean to be too static? It means that the character isn’t growing or changing. The opposite of a static character is a dynamic character. That’s a character that grows and evolves. In most stories (but not all) our protagonists grow and change and are dynamic dynamos. They are characters we root for or follow, right? The evil miser who hates Christmas becomes a generous benefactor. A little boy wizard who hides under the stairs becomes a wizard leader in the fight against darkness. But if you think about the James Patterson series’s protagonists, most of them are like Sherlock Holmes and they don’t really grow and change. They are pretty consistent a lot of times. And then there is the bad guy/antagonist. Some editors will want your bad guy to grow and be dynamic too, but a lot of times those baddies and a lot of your side/secondary characters will be pretty consistent and static. Think Hannibal Lecter. Think Gaston in Disney’s Beauty and the Beast. What can you use static characters for? To be foils to the main character. To make fun of tropes and stereotypes or shallow people in society. To get pulled along in the main character’s fun. To sometimes have contradictory goals that create ... 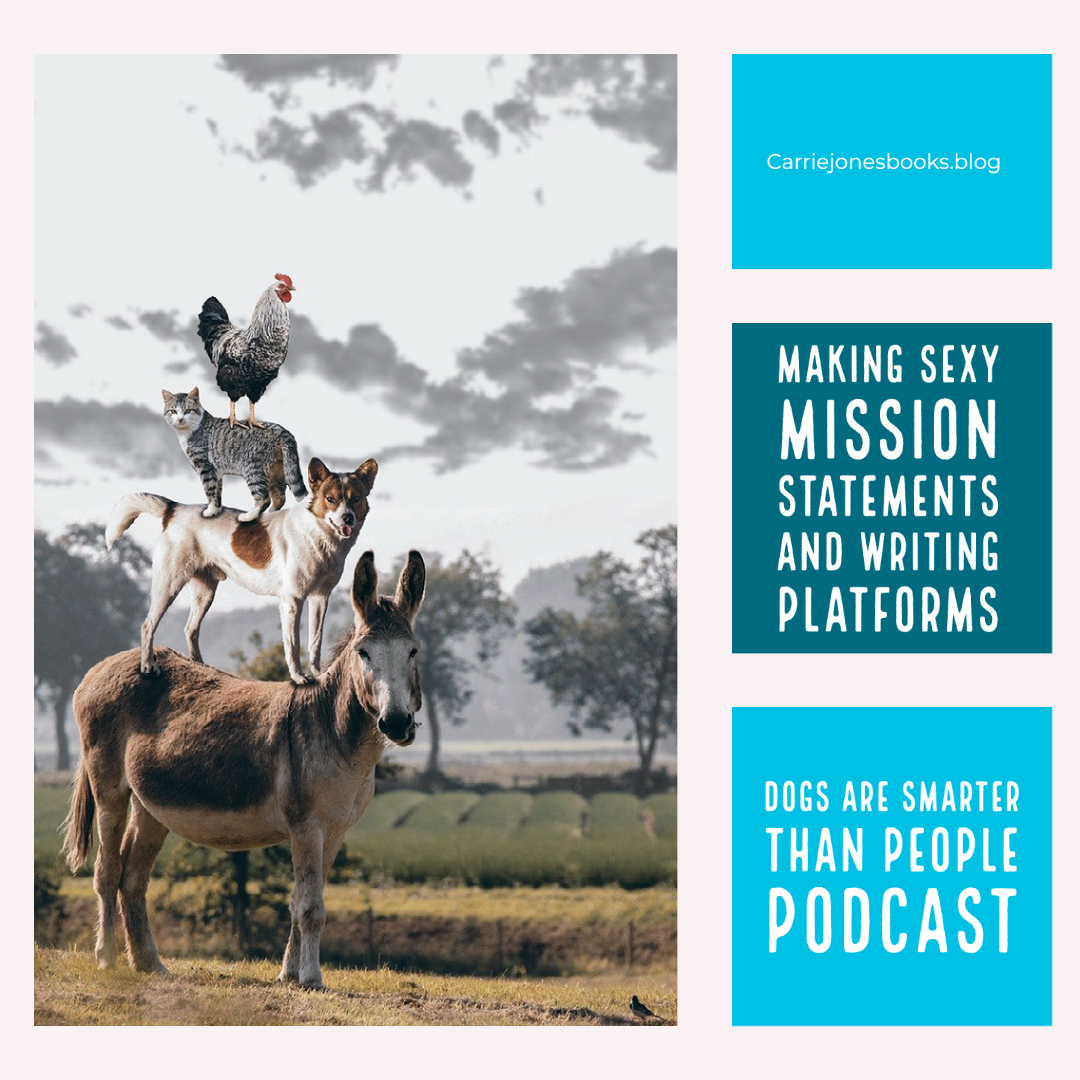 The Poop And The Magician, Archetypes and You

Over the past couple of months, we’ve been talking a lot about archetypes and how you can use them in writing and life, but we’ve failed to discuss where all this talk stems from.  It’s all from Carl Jung who is an old, dead, psychology pioneer who didn’t agree with another old dead guy, Sigmund Freud.  Jung was about the ‘collective unconsciousness.’ And he thought that in humanity’s collective unconsciousness there were basically twelve archetypes of character. We define this in our last podcast and this week, we’re finishing up with those twelve archetypes as they relate to finding poop in your driveway because we’re weird like that.  THE REMAINING ARCHETYPES! 7. The Magician It’s all about growing and evolving but the crankier magicians are not revolutionaries who lift up others. Instead, they are cranky buttfaces who turn positives into negatives and their attitude is contagious. A magician will see poop in the driveway and potentially think of a way to make it an energy source that will reduce carbon emissions. Or they might just tweet, “Poop in driveway. Angst. Everything completely sucks. What is the point?  8. The Hero Ah. Power. The hero likes it. The hero is vital and all about battling for honor or power. They do not like to lose. They do not give up. They find that poop and loft it at the doghouse of the enemy. They tweet a photo of poop smeared, “I protect my own. Consider yourself warned.”  They then make ...