Dogs Are Smarter Than People: Writing Life, Marriage and Motivation
The Apple Hi! This year (2022), I've decided to share a poem on my blog and podcast and read it aloud. It's all a part of my quest to be brave and apparently the things that I'm scared about still include:

Thanks for being here with me and cheering me on and I hope that you can become braver this year, too!

The apple fell to the ground joining the others; rotting had already begun the way it does. We all fall and crack. On the wire a squirrel ran to the right, green apple in her mouth, prized obviously, bigger than her head. Another fell before a second squirrel appeared, apple in mouth, bounding on the wire to the left this time. I know I’m not the squirrels. I know I am not an apple (though I feel round lately), but I gather things too big to hold and drop so many, bringing them to the road where they’ll be carried off by others or maybe smooshed under wheels of cars or just left to rot. I know. I’m not the apple rolling aimlessly until I can’t move anymore. I know.

Hey, thanks for listening to Carrie Does Poems. These podcasts and more writing tips are at Carrie’s website, carriejonesbooks.blog. There’s also a donation button there. Even a dollar inspires a happy dance in Carrie, so thank you for your support. The music you hear is made available through the creative commons and it’s a bit of a shortened track from the fantastic Eric Van der Westen and the track is called A Feather and off the album The Crown Lobster Trilogy.

While Carrie only posts poems weekly here, she has them (in written form) almost every weekday over on Medium. You should check it out!

Woman Wipes Her Dog's Bum and No Talent No Problem

First we talk about this woman who saw Elvis in her McDonald’s ketchup and then a little bit about a lady who lets her dog sit at the table and wipes his bum. Steve Martin, author, comedian, musician, cool human, has this MasterClass where he talks about how when he started out in show business and had absolutely no talent at all. But he took a chance at a comedy writing job where they basically just needed young people to write jokes. He has three big wisdom chunks we share with you before Shaunie derails completely into the Land of Naughty. DOG TIP FOR LIFE Be always in reaching distance of the person who has the food and demand a seat at the table. LINKS! https://positivepsychology.com/happiness-wellbeing-coaching-perma/ https://www.mirror.co.uk/news/weird-news/mum-double-take-after-spotting-28148114 https://www.mirror.co.uk/news/weird-news/i-wipe-dogs-bottom-eat-28141647 ... Don't Be So Wordy, Punk, plus Stabbings and Vampires

A lot of us humans and writers spend a lot of time trying to impress people by being extra wordy. And it seems like we’re all trying to avoid the word “because.” This is extremely cruel to the word “because,” which probably gets hurt feelings, but it’s also super cruel to your readers and/or listeners who deserve clarity. They need to understand what you’re putting down. So, when it comes to “because,” we do not need to say: The reason is because (that’s redundant).Due to the fact thatOn the grounds thatOn account of If you sound like a lawyer in a bad tv procedural? You’re trying too hard. HERE IS CONTRARY ADVICE…. “BECAUSE” OR “SINCE” CAN SOMETIMES FORCE YOU TO BE WORDY. With the words ‘because’ and ‘since,’ you can almost always use either one. They are interchangeable BFFs. Here are some examples. Because I hate you, I decided to date.Since I hate you, I decided to date. They both mean “because” here because they are synonyms. But sometimes “since” means “from the time’ instead of ‘because.’ Since we went to Disney, I’ve been crushing on Pluto. That means “ever since the time they went to Disney” not “because.” But you might not know that, right? So, instead you might want to be wordy. You don’t want to be ambiguous and have people wondering if you mean “because” or “ever since the time they went to Disney.” The whole point in writing and talking is for people to understand you, so don’t be a schmuck. Be clear. WRITING TIP OF THE POD Don’t be wordy and know what your words mean and what they’re conveying to the reader. DOG TIP FOR LIFE Listen more than you speak. Look for clues in your environment and people’s actions so ... 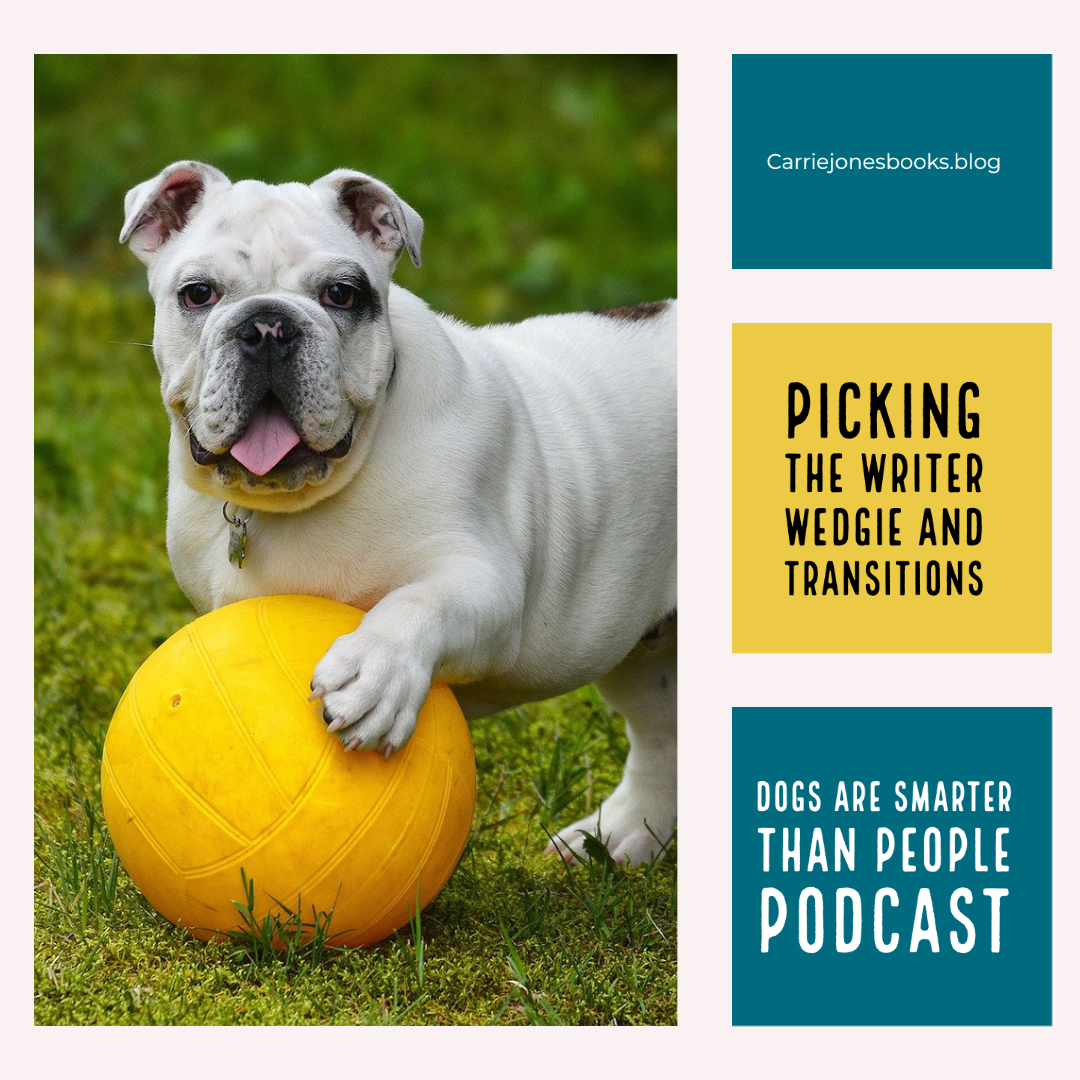 Picking the Writer Wedgie and Transitions

In life and in story, you have these things called transitions. Places were things change. You go from one place to another, one scene to another, one chapter to another, one husband to another, one president to another. A really good transition is really just a bridge that helps the reader go logically from one section, scene, chapter to another without it being awkward like a bad date or making their brain hitch where they say things like “We were just in space and now we’re at Wal-Mart? What the heck?” Some people are amazing at transitions. Some people have awkward transitions. Some refuse to acknowledge there even is a transition. But in the writing world, you want them to be smooth and there are a bunch of transitional phrases and words that authors fall back on to help them do that like: A week later (or whenever)At the same timeAfterwardsFor two weeks/days/minutesMeanwhileAt nightThe next dayThe next nightFor a month, I cried into the phoneIn the morningWhen the sun roseWhen the sun setThe following Monday/night/morningMonths passedWeeks passedWhen we got back to the officeWhen they got back homeAs the neared the date site Then there are the phrases that show us a change in location: They boarded the trainDown the streetUp on the third floor of the officeOver by the water coolerBack in my living roomThe motorcycle was situatedShe ran fast through the dark alleyIn the hall of the hospitalOutside on my front lawn And so on. There are a lot more examples of both of these, but we just wanted to give you a quick look at them. Sometimes though, us writers tell our readers TOO much and it ends up sounding like script or stage directions. Those ...