Money Is Not the Enemy and the Habits of the Rich Dogs Are Smarter Than People: Writing Life, Marriage and Motivation
Money Is Not the Enemy and the Habits of the Rich

So apparently millionaires have habits that us non-millionaire people don’t have.

These habits don’t include taking a bath in $100 bills even though that would be cool. The habits aren’t quite that sexy.

So before we get started, we just wanted to remind you that prosperity doesn’t equal merit. The richest people sure as hell aren’t the best people, the kindest people, or the most ethical people. They are the richest. That’s it. Some of them are nice. Some are douchebags. Some are in between.

But prosperity is super intriguing right now because a lot of us are a bit struggling to figure out how to survive and if that’s you, we get it. But we want you to do more than struggle, we want you to feel secure.

In Lifehack, Dr. Carol Morgan has an article entitled “8 Ways of Thinking To Make You Become Rich.”

Her ideas are mostly about belief mindsets.

So some of these ideas are pretty chill. Like “believe you are worthy.” Presidents are very good at this – presidents from both parties, actually and all the candidates.

The rest of us humans and especially writers? Not so much.

Don’t think about how you suck or how you aren’t a YouTube star or J.K. Rowling or whatever. You need to believe in yourself and that you have something to offer this damn world. What you offer is what will make you wealthier.

Writers have a hard time with this.

Then you have to go another step and believe that you can actually do it.  Yep. You have to believe you have worth and then believe you can make things happen.

Be grateful that you are alive still. Hopefully, you have some food. So don’t only focus on what you want, but be delighted by what you have. Delight is a much cooler word than gratitude one of my author friends just said. I believe her.

I feel like the doctor who wrote this article might be saying this because she’s rich. But socio-economic status should never be a deciding factor in why you think someone is evil. How they act or don’t act? Those are better reasons.

Make a vison board or say happy mantras or make a Pinterest page or something. All last year I wrote down the things I wanted. I did this every day in the morning. Some of them are coming true.

Not really, but don’t hate it. That hate-attitude isn’t going to attract the money. Plus, like Dr. Morgan says a lot of people go around saying that they hate money, but “That doesn’t mean that they really HATE money. They just hate the LACK of money.”

Okay, she didn’t say it this way, but instead of being negative about it, think about how freaking lucky you are to be able to pay those damn bills and not having the creditor come or your car repo’d. Baby, that’s sexy.

Yep, that’s right commitment phobes. You want to commit to lining that bank account with the green and gold. Be focused. Go after it. Commit.

How about some slightly more practical advice?

Make a budget. Know the money coming in and out.

Chip away at your debt. Because that interest rate is pulling you down and making you cement.

Don’t have all your income coming in from one place because crap like pandemics happen.

Be cool with spending money on yourself to build skills.

Do What You’re Good At.

Remember even the biggest things can fail and that’s okay. But what’s not okay is stasis, not trying.

“I have had many struggles through this coronavirus experience — but the areas where I have not struggled are the places I have rehearsed what might happen.”

It’s hard when you get rejected to keep believing in yourself, but you have to. You have to keep trying. And deep down in your core? That’s where you know it’s going to happen. Make it happen.

Get your stuff wherever you can. Trash cans. Litter boxes. Begging. Don't depend on one source.

A bonus interview with poet and coach Fiona Mackintosh Cameron.

Dogs Are Smarter Than People - Episode Two - Living With a Writer

Podcast Two – It’s Hard Living With a Writer Writers and over-thinkers like Carrie break down every word and symbol into multiple layers and levels. That’s because authors spend so much of their time analyzing interactions and sentences and people. We recreate the world into our story by building that story word by word and symbol by symbol.   Sometimes that’s hard to live with especially when the writer is (cough) sensitive (cough). Dog Tip – Cut Through the Noise. Dogs don’t pay attention to every word. They pay attention to intent. Live like a dog, but write like a writer.   Writing Tip – Make yourself more aware of the words you use and the symbols they are sending to a reader. When I write, “tree,” Shaun sees a kid’s drawing of a tree – a triangle with green crayon colored in. That’s not what I ever expected. Write all the different kinds of trees you can think of. Then write all the states of being a tree can have like, barren, bent, ice-covered, growing, etc. There are so many ways that one word can be interpreted. Pick the words in your stories ... 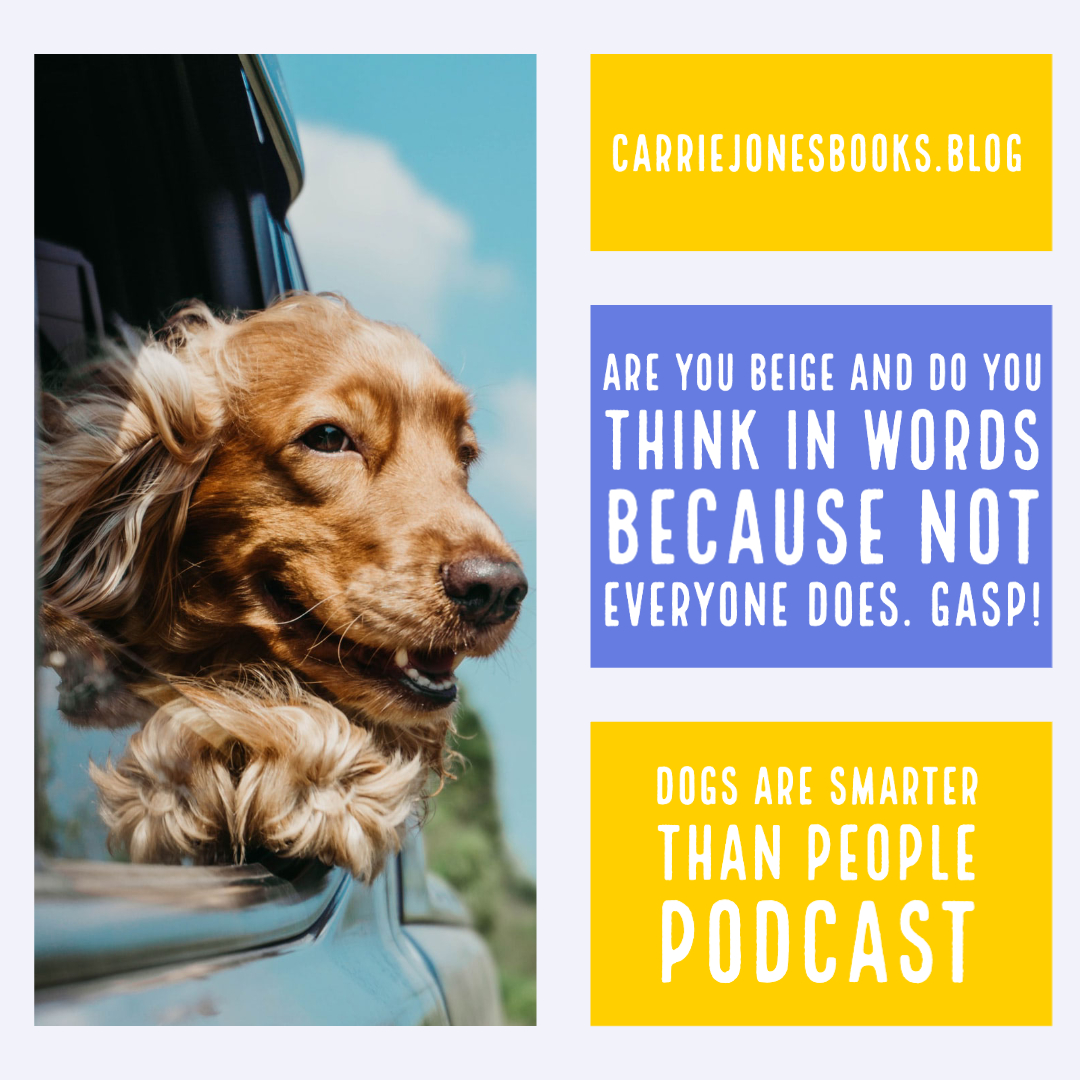 How to Be A HAPPY writer, Big Foot, Statues that Pee

This week’s podcast is about something really important. It’s about remembering to have fun. For a lot of us, life has a ton of stressors and responsibilities. We have to make enough money to survive. We have to take care of our family and ourselves. We have to deal with a world and not succumb to constant catastrophic thinking about the state of the world.  It’s easy to forget to have fun.  Or to feel guilty about having fun.  Or to feel guilty about having hobbies.  And here’s the thing. It’s great to be a professional writer and make money at something you love to do, but you don’t have to make money at it. A lack of financial rewards for your efforts doesn’t mean you’re a failure. It just means you aren’t getting money.  And money, my friends, is not everything.  What is everything? Having fun. Growing. Enjoying your damn self in this short amount of time you have on this world, making yourself wiser and stronger and embracing your moments of joy. Everyone who sings in the shower isn’t expected to make money at singing in the shower. That should go for those of us who write too.  Here’s the truth: You can write solely for the joy of writing.  Don’t let other people’s opinions or standards give you or your writing validation. Don’t let the pressure for external measures of success (publication, an agent, an award, 100,000 social media followers) ruin your joy in creating stories.  ...