Emotional Immaturity is Us Farts are Everywhere 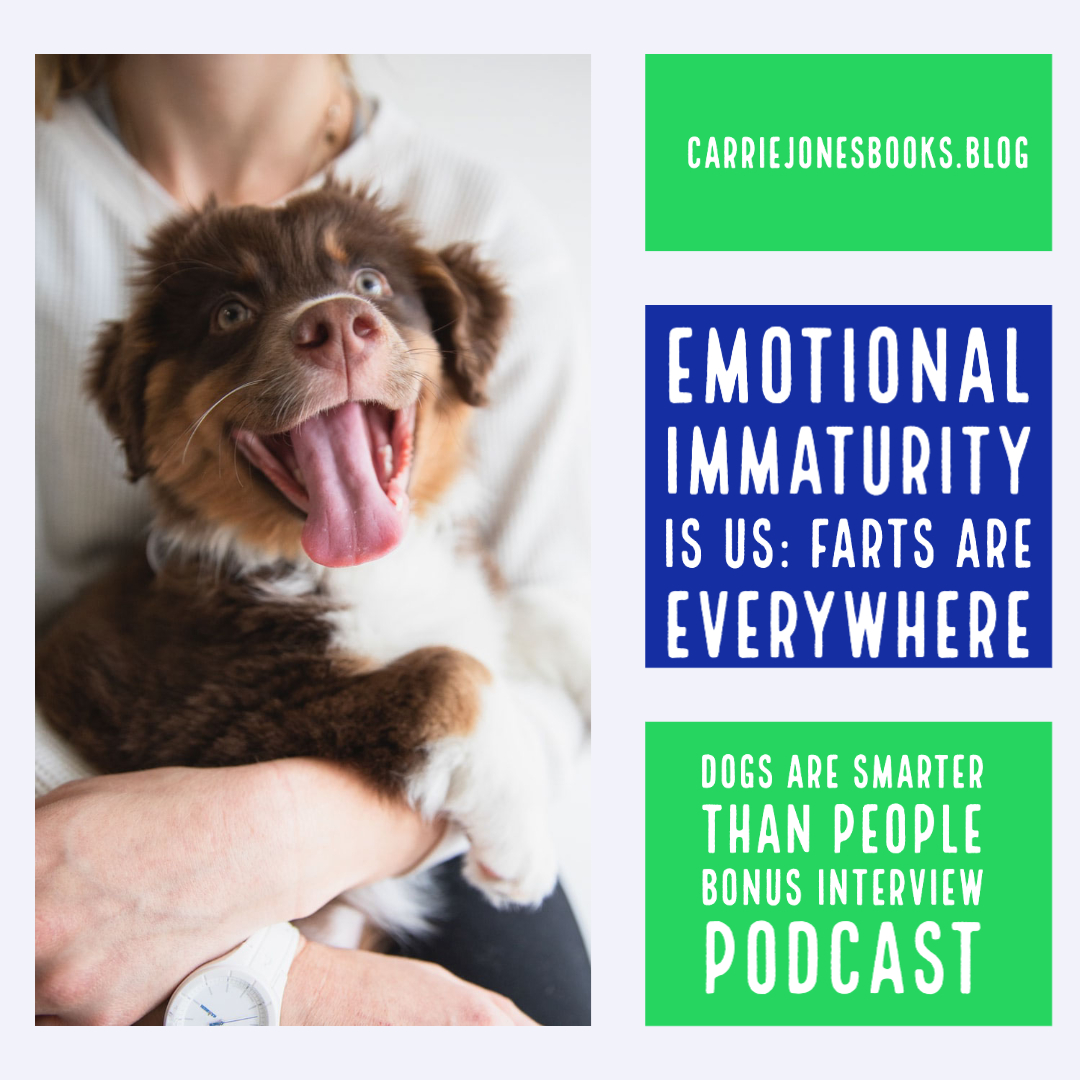 Dogs Are Smarter Than People: Writing Life, Marriage and Motivation
Emotional Immaturity is Us Farts are Everywhere So, um, as you can tell, during the self-isolation, stay-at-home orders of our pandemic, we have descended into the land of the immature.

Carrie had high hopes of using this time to build up our intellectual skills and read the NYT and Rousseau and Descartes by the light of the pellet stove. But instead we watched Tiger King and What We Do in the Shadows obsessively.

Which brings us to the topic of our episode.

No. Not farts again. But a Medium article by Niklas Goke entitled

(The link is in the podcast notes.)

So, Niklas has a bunch of assertions about how we know if we are emotionally mature, which seems a pretty big construct in itself, right? Like how do we as a society define maturity if we as a society can’t even define what is truth? But whatever, we’re just going to go with it because it’s not farts.

Niklas says that you have to train yourself to be emotionally mature and build the characteristics. He’s got fifteen characteristics because he’s apparently an overachieving guy. But he actually took his questions from The School of Life’s 25 suggestions about emotional maturity. So, it’s all derivative, baby.

We’re joining in. And we’re condensing them into five.

It’s Not All About You All the Damn Time

Not All People are Psychics

You might want to think about what your actions and facial expressions are telling the people who are stuck in the room with you. Nikos says we don’t all have a lovely Sims icon over our heads telling people our feelings. When people don’t realize you’re hungry or sad? That’s not always on them. It’s sometimes because you aren’t giving them the clues. Express how you feel so everyone doesn’t have to guess all the damn time. That’s mature.

You Are Cool In Your Lack of Coolness

You aren’t perfect. You can be annoying. The people who matter will love you anyway. We have so many bad scripts and biases running in our heads. Don’t waste a lot of time or energy trying to pretend to be perfect.  It’s best to admit when you muck up or that you have weaknesses and be open about your boo-boos. It means your strong. That’s mature and also sexy.

Try To Be Chill About the Dorks

Realize a lot of time when other people suck, it’s because they are lonely or upset or feeling super vulnerable. Try to respond with kindness unless they are really hurting you or a threat. Then respond with a restraining order. You have to protect you, too. That’s mature.

It’s okay to realize that there’s no reason to be angry, to compromise, to love others even though they are flawed and appreciate those flaws, those compromises, your own ‘failures.’ Celebrate being alive every day and having enough money to get coffee, to be able to hug your friends, to go through life without a mask on. Those things we take for granted? They are big things even though they might seem small. Appreciation? That’s mature. And also sexy.

Writing tip of the Pod:

It’s okay to have a mature character once in awhile.

It’s okay to be the mature character once in awhile. It’s also okay to fart.

A bonus interview with poet and coach Fiona Mackintosh Cameron.

So, a long time ago Carrie had a dog named Scotty, and she used to fill in at the police department as a dispatcher. For those of you who don’t know, she dispatched part-time because even though she made enough money writing (right then) she got worried that: Carrie's Worries 1. I will suddenly make no money at all 2. I need to build up social security benefits 3. I will forget how to interact with other humans if I’m always at home.  ONE DAY HER GOOD DOGS WENT BAD So, she worked from 3:30 to 11:30 pm and when she came home Tala and Scotty, her dogs, greeted her at the door, all doggy happy. Scotty was her new dog and he was a rescue dog from Alabama who was in a kill shelter, and for a long time we have thought that he was perhaps a grandpa who liked crawfish and Bud Lite a lot and was somehow caught in a dog’s body - like he was a shapeshifter who got stuck.  He had a puncture wound in his neck when he got to Maine, two small holes. So, a vampire with a shapeshifting virus was possibly to blame.  Carrie had decided this was a true possibility. Already, she'd witnessed him: 1. Get ice out of the refrigerator.2. Use his paw on a door handle to open a door. And ...

There is an article over on Medium that annoyed Carrie, which to be fair, Medium articles by self-professed self-help gurus often do. Cough. It's not because the guy has 250,000 followers, she swears. It's just because he's a bro-looking white guy regurgitating other people's stuff. And here's the thing. To make impact, you don't want to vomit up other people's books or thoughts. You want to be your own person. In New Hampshire literary circles of the 1970s and 1980s there was a dynamic poetry husband and wife duo of Donald Hall and Jane Kenyon. They were nothing alike in their poetry and Donald usually received a lot more kudos, but Jane? She made her moments. I'll always remember my Aunt Maxine introducing me to Jane when I was eight or something and saying, "She is a spectacular poet." She pretty much gasped it all out because she was so enthralled. I always wanted to be gasp worthy, honestly--in a good way, right? So, there's a piece in the National Book Review by Mike Pride that talks a bit about Jane (who died at just 47) where it talks about how her husband dealt with people being stupid about the difference between their poems and styles. "Hall reacted when anyone suggested that he was a poet of big ideas while his wife wrote sweet and simple poems. “Yeah,” he’d say, “her style is a glass of water – a 100-proof glass of water.” There is a tendency for us all to look away from the moments, the truths of our lives and existence and instead go for those superlative, larger than life moments, stories, celebrities, all that ... 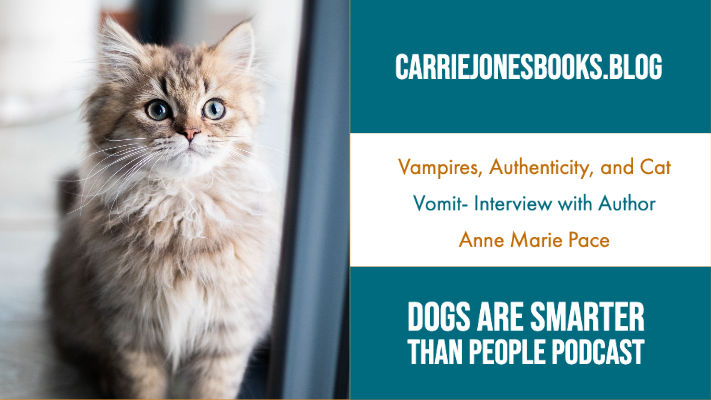 Hey! Welcome to a bonus interview episode of Dogs are Smarter Than People, the usually quirky podcast that gives writing tips and life tips. I’m Carrie Jones and with me today is Anne Marie Pace Anne Marie Pace! Anne Marie is an authenticity rock star. She’s the author of Vamperina Ballerina, Pigloo, Sonny’s Tow-truck, human-parent to animals and humans. She likes to read, cook, do some fine choral singing and be an all-around great friend. Anne Marie, it is so great for you to be here.  We talk about the inspiration for Vampirina Ballerina, a vampire who wants to take ballet lessons, cats who throw up and dogs who eat it, openness and mental health and being authentic even on social media. I hope you'll give it a listen and support one of the coolest writers around. Find out more about Anne Marie at her website. Okay, well, my website is annemariepace.com, her Twitter is AnneMariePace, and her Vampirina page is http://www.facebook.com/VampirinaBallerina WHERE TO FIND OUR PODCAST, DOGS ARE SMARTER THAN PEOPLE. The podcast link if you don’t see it above. Plus, it’s everywhere like Apple Music, iTunes, Stitcher, Spotify, and more. Just google, “DOGS ARE SMARTER THAN PEOPLE” then like and subscribe. ...