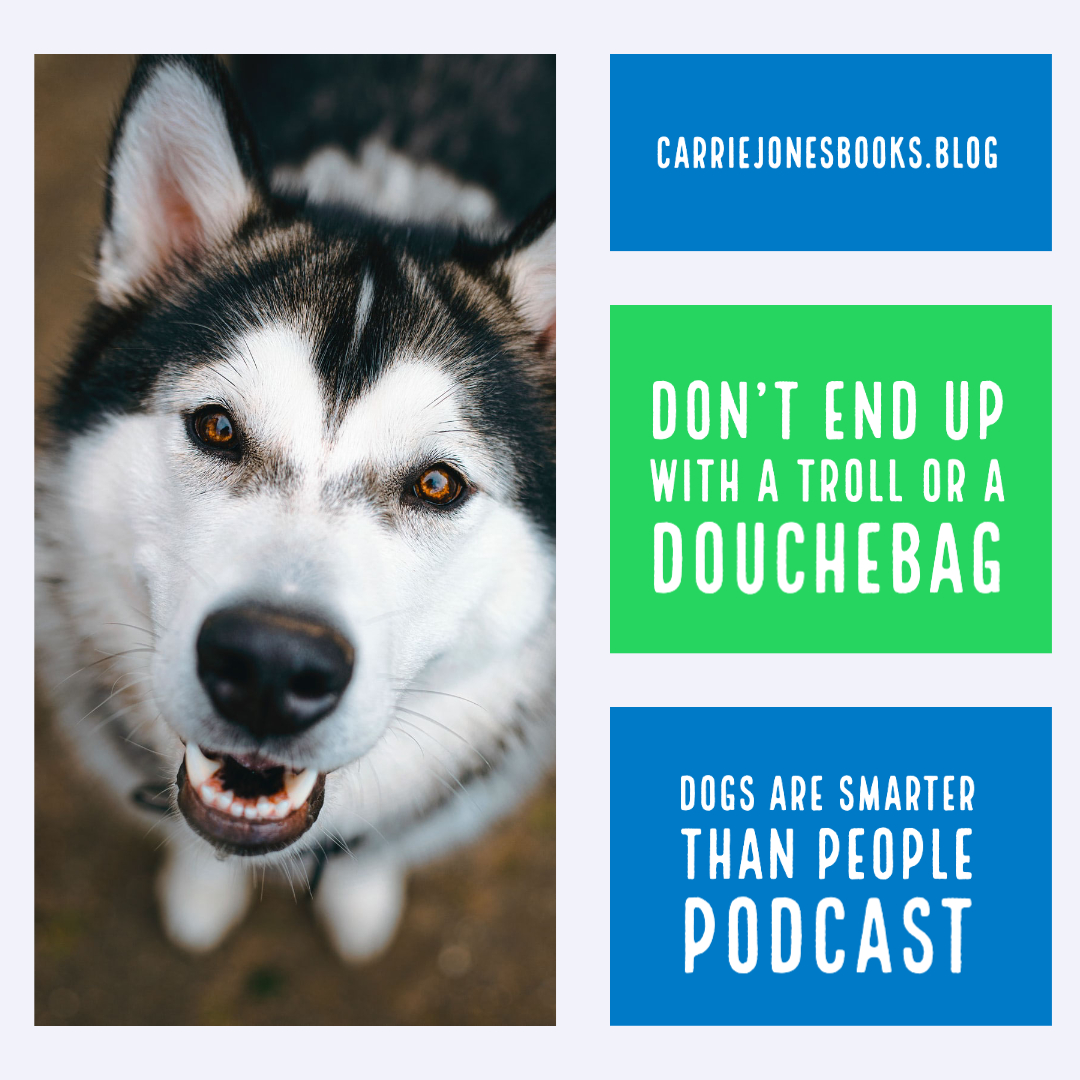 Dogs Are Smarter Than People: Writing Life, Marriage and Motivation
Don’t End Up With a Troll or a Douchebag - The Two Question Rule and Relationships EVERYONE! This podcast is explicit because it has a swear in it (Thanks, Shaun) and also has brief embarrassing talk (for me - Carrie - at least because I am uptight) about the male anatomy.

Okay. We’re married, but we weren’t always married, right? Like it didn’t happen when we were two and the first people we married were - cough -definitely not each other.

But we’re going to talk about dating anyway. And there is this concept that’s on Shallon Lester’s YouTube videos called the Two Question Rule. Lester is kind of a gossip columnist and sex advice person, but we’re going to be okay with that for this podcast.

This is not related to the five-second rule where you get to eat food if it’s only fallen on the floor for five seconds. I am so sorry Shaun.

Here’s the rule, simplified thanks to a Medium article by Emma Austin.

“When you’re getting to know a guy, especially if you’re flirting or seeing where things are going, pay attention to how many questions you’re asking him and how many questions he’s asking you in return. If you routinely ask more than two questions without him asking you any, take it as a sign that he’s not interested in you.”

Here’s the thing. We all want to think that the other person is actually interested in us and so we ignore the signs that they aren’t.

What are those signs?

We are creatures of hope and sometimes we’re so desperate to feel loved that we end up with douchebags because we’ve blown off all the signs.

“And a lot of times, you just like someone and it makes you a little too hopeful. You really want them to like you back, so you look for all the little signs that they do — and ignore the bigger signs that they don’t. You project your feelings on them a bit and you find yourself making excuses for their behavior. Because at least the excuses feel better than the truth. You don’t want them to not be interested in you — you’d rather they were just too busy or going through something or having a weird day.”

When you’re having your characters interact and it’s a romance? Remember this rule. Don’t let your heroine do all the questioning? Don’t make her love interest a douchebag who only talks about themselves and never ask about her.

And remember all of this is super heteronormative because we're quoting Austin and Lester, but this also goes for same-sex relationships and women can absolutely be as trollish as men when it comes to relationships.

Try to remember that it isn’t always all about you. Don’t be the douchebag. Give love as well as accepting the treats. Ask the questions. Be interested. Don't only be about yourself all the time.

WHERE TO FIND OUR PODCAST, DOGS ARE SMARTER THAN PEOPLE

The podcast link if you don’t see it above. Plus, it’s everywhere like Apple Music, iTunes, Stitcher, Spotify, and more. Just google, “DOGS ARE SMARTER THAN PEOPLE” then like and subscribe. Join one of 201,000 downloads and be weird with us!

This week's episode link if you can't see it in your browser.

That's right! Carrie's doing bonus interviews every Thursday. And they are so much fun.

THE WRITING COURSE OF AWESOME

It’s our very own writing course!

Basically, it’s set up a bit like a distance MFA program, only it costs a lot less and also has a big element of writer support built in and personalized feedback from me! This program costs $125 a month and runs for four-month sessions!

These next few podcasts, we thought we should get all nitty-gritty with some quick grammar tips or style tips for people writing fiction. It can help you nonfiction writers, too, we swear. When you’re writing dialogue (people talking to each other), you’re going to want to follow these punctuation rules. Use quotes. Have the dialogue tag (who the speaker is, the he said/she asked) in the actual same paragraph as the dialogue. Punctuate it all correctly. (That’s a lot of knowledge right there.) But here’s the big one: Don’t go screwing around with those dialogue tags, also known as speaker tags. You want to keep it simple when it’s a dialogue tag. “Said” and “asked” are your besties here. If you do anything else? You look like a crappy writer who is trying too hard and the tag becomes more attention-grabbing than the very important words your character said. “I love you,” she said reads a lot differently than “I love you,” she murmured and bellowed and hissed. That can be your intention, but you don’t want to keep doing it all the time. Here look at it. “I love you,” she murmured. “I love you,” he cat-called. “I know,” she bellowed. He screamed, “Of course you do.” “And what do you mean by that?” she enthused. So, the other big thing to remember is this: You can’t sigh out or smile out words, so don’t use them for speaker tags. You can use them for dialogue beats, but that means you have to punctuate them differently. “I love you,” she said. – Requires a comma after the word ‘you,’ and a lower-case S for ‘she.’ “I love you.” She sighed. – Requires a period after the word ‘you,’ and an upper-case S for ‘she.’ Oh, and ...

Man, That's a Beautiful Mullet and How To Pace Your Novel

Just like hanging out with a friend, or listening to an instructor drone on and on about the beauty of a mullet, the keys to controlling your novel’s pacing are language and conflict and scene sequence and stakes. We’re going to talk about those today. What’s pacing?It’s how fast or slow the story goes for the reader. LANGUAGE IS A BIG WAY TO IMPACT PACE Let’s start with word choice. The words you choose can speed up the reader or slow them down. The way the words are grouped on the page? Same thing. Dialogue.Short paragraphs.Short sentences.Action. Those four things speed things up. And these things below? They slow that story down. Descriptive passages.Long paragraphs.Long sentences.Abstract language.A lot of talk about feelings.Flashbacks.Information dumps. Special Help: If all your sentences are the same length and are constantly parallel in construction, you lull the reader to sleep. No sleeping readers, okay? You fall asleep, you run the risk of getting a mullet. CONFLICT AND STAKES IS ANOTHER WAY TO IMPACT PACING In the scenes you choose, there needs to be some stakes and some conflict. Stakes happen when your reader cares about the character and is worried about what might happen to them if they don’t reach their goals. In every scene that stays in your book, there needs to be a stake and a goal. You can’t just have your character chilling with her bestie if there’s no point in that chillin. You need obstacles and tension and the reader needs to think, “Yikes! What happens if they fail?” It’s really one of the biggest things about pacing. Because not having conflict and stakes and tension? It makes the reader stop reading. Scene Sequence Also Impacts Pace And here it is. The ... 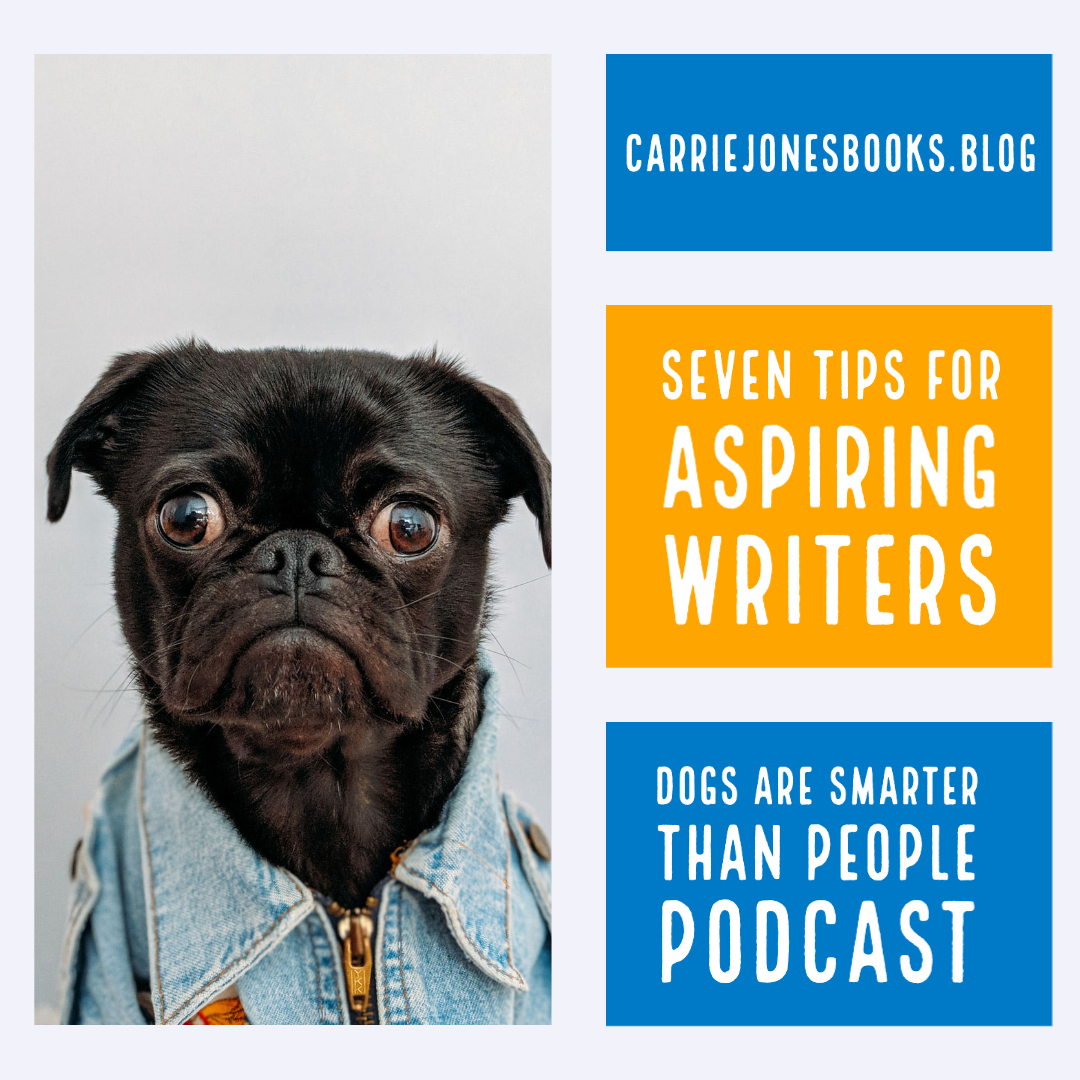 DUDE, DON’T WHATEVER ME

We like to think that our lives have a point and that they matter. I think they do, but we’re not here to get all esoteric on you. We’re here to help you be better writers and humans and one of the biggest things we need to tell you is this.    You need to ban the ‘whatever.’    If you want your life to have a point then you need to give it a point.    If you want your story to have a point? Same thing.    Your life and your story should never be about ‘whatever.’    In life, you fix things when they break. You create goals. You move forward to solve things. In your story? Well it needs to happen that way too. We have to lean into the guiding force that creates every moment and scene in our stories.    We focus so much on our feelings and our emotions, but here’s the thing – emotions change, feelings are flighty. What matters is our point or our purpose and that matters both overall and in the moment.    Remembering your point or purpose works really well when you’re arguing with your partner because they failed to hear you when you said, “Can you put the onions in the pot, right now?” Instead of being super cranky and resentful that they didn’t put the onions in the pot for two minutes, you can think, “Wait. What is my purpose of being with this person?”   Chances are your purpose isn’t about getting onions quickly ...