Don't Be a Punk. Coronavirus and People Being Liars Dogs Are Smarter Than People: Writing Life, Marriage and Motivation
Don't Be a Punk. Coronavirus and People Being Liars

If you’re going to write or communicate, it’s really cool to know what you’re writing or talking about.

What? I know, right? Mind blown.

It should be self-evident, but sadly it seems that this is not self evident.

None of us are omniscient. We all see things from our own perspectives built upon by our culture and our experiences. Yet, some people think that they know everything and lay down these edicts about what the right way to vote, to write, to think, to create, to live is.

But these same people don’t know the difference between unfazed and unphased. Don’t be one of those people.

When you write, when you live, when you troll people on social media? Check your words and your facts. It makes your argument and your story and your opinion so much stronger when you can spell things correctly or when you have stats to back up your arguments.

And there is nothing bad about realizing that you’re wrong, about growing as a human in your thoughts. Evolving is a good thing. We promise.

Writing Tip of the Pod:

It’s okay to break the rules, but know the rules you’re breaking. Study your craft before you start telling people there is only one right way to do things.

Know what you’re barking at, man. Don’t call a blowing bag a squirrel.

Free Write for Your Story:

Write about a character who thinks that he/she/they know everything about something but they are terribly wrong.

Note: We hunt for ghosts and talk about douchebags in our random thoughts, which are not transcribed here.

Over 170,000 people have downloaded episodes of our podcast, DOGS ARE SMARTER THAN PEOPLE, you should join them. There will be a new episode tomorrow!

I have a new book out!!!!!! It's an adult mystery set in the town where we live, which is Bar Harbor, Maine. You can order it here. And you totally should. 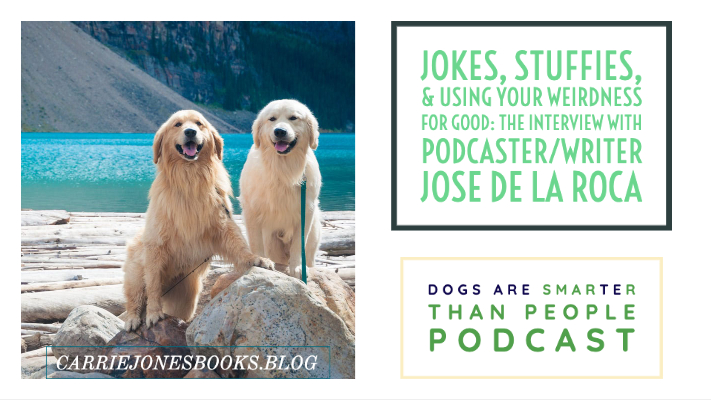 You know how sometimes you need a real-life friend of awesome who torments you so that you evolve? And sometimes you don't know how to say that friend's last name. That's Sam for me. Sam is a research technologist at the Jackson Laboratory in Bar Harbor and she joins me to talk about evolving, being brave, and how hard it is to be my friend. Just kidding! Just kidding! Sort of. Sam does some pretty exciting research with Ron Korstange and the lab itself is doing tons of research and testing related to Covid-19. RECENT EPISODES OF AWESOME AND BONUS INTERVIEWS This week’s episode link.  Last week’s episode link .  Link to Sam's interview. A bonus interview with Dr. J.L. Delozier, Pennsylvania doctor and writer.  A bonus interview with poet and coach Fiona Mackintosh Cameron.  ... Passive Aggressive Much? And How to Become More Awesome in Just 30 Minutes a Day

Over on the random thought part of the podcast, we hear about Carrie being passive-aggressive at the campground bathroom, Shaun sing, and random people at Smokey's Barbecue and Lobster. But here is the more intellectual stuff. Um. Slightly more intellectual stuff? This guy Malcolm Gladwell wrote a book Outliers and in it he outlines his belief that if you practice something for 10,000 hours and do that in a deliberate way, then you’ll become a top performer. Who are the outliers? They are the best and the brightest.  We don’t want you to freak out over that 10,000 hours bit because that’s like saying, “Hey Shaun, I know you can’t run more than 60 seconds right now, but this Friday you’re going to run for 93 minutes.” Spoiler alert: Shaun ran for 93-minutes straight on Friday. Carrie did too. Anyway, this guy named Danny Forest who writes on Medium breaks it down to something that feels a bit more doable. He says that he can learn soft skills in about eight hours and breaks it into working 30 minutes each day on those skills.  That seems a lot better than 10,000 hours, right? There’s a difference between competence and brilliance, but that half-hour concentrated focus is how so many of us build our skills. Even dogs.  So, inspired by Mr. Forest, the Farrar has three things he wants to learn:  Make movies on ...